A trip along the Jane Addams Trail can be an exercise in time travel if one takes the time to learn a bit about the geology along the route. The rock layers are topographic features exposed along the route that can tell us a lot about some of the events that happened in the distant past, long before any Native American or European settlers arrived in the area. We’ll start with the bedrock. Two major sedimentary units are encountered as one travels north from Freeport: the Galena Dolomite and the Platteville Dolomite. These are arranged in layer cake fashion with the Galena above the Platteville, but the cake has been gently tilted by the uplift of the Wisconsin arch. The relationship between the layers is shown in the cross section below:

The angle of tilt is actually less than one degree and has been exaggerated for the cross section. As erosion has leveled out the surface, progressively deeper layers are exposed farther south. North of Monroe the St. Peter Sandstone is exposed, and the deeper Cambrian Sandstones provide the bedrock into which the Wisconsin River has carved the famous Dells. The St. Petere Sandstone, Platteville Dolomite and Galena Dollomite tell a story of a gradually changing environment in the Midwest during the Middle Ordovician Period (~ 450 million years ago). The St. Peter is the oldest (since it is lowest in the section) so we’ll begin there.

St. Peter Sandstone
Most formations are named after the location where they were first identified and studied by a geologist. The St. Peter Sandstone was first studied in outcrops that occur along the Minnesota river southwest of Minneapolis-St. Paul, near a town called St. Peter. The St. Peter is a very pure, fine grained, well sorted sandstone. It consists almost entirely of the mineral quartz. In fact, it is so pure that in many parts of the Midwest it is mined as a source of silica sand for use as an abrasive, as a raw material in the manufacture of glass, and for use in foundries that produce sand castings.

The St. Peter Sandstone was probably deposited in a beach or very shallow, nearshore environment. At the time this sand was deposited, the Upper Midwest was apparently a nearly level plane that sloped very gently to the southeast. As sea level gradually rose during the middle to late Ordovician Period, the shoreline slowly migrated from southern Illinois to Minnesota. The extreme purity of the sand is the result of a long period of washing around in the surf, with most of the clay and other impurities being washed out to sea. Fossils are rare in the St. Peter; most shells and other material that could have been fossilized were ground away in the surf.

Platteville Dolomite
As sea level gradually deepened over Illinois, the shoreline moved northwest. Beyond the reach of the surf, living organisms prospered in relatively quiet waters. An ecosystem somewhat similar to that found in modern coral reefs thrived in the shallow, tropical sea. In modern reefs, coral grows to produce branching projections of limey rock which, together with the shells of other organisms that inhabit the rich environment, gradually builds the reef. During Ordovician time, the main reef building animals were bryozoans. The branching, twig-like structures of these organisms resemble some species of modern coral, but they are not closely related. Like corals, the bryozoans lived in colonies, with thousands of individual animals living in pinhole sized depressions on the surface of the branching superstructure. Each individual organism secreted calcium carbonate (lime) to form a protective shell and bond it to its neighbor. From their tiny chambers, each individual bryozoan filtered algae and bits of food from the water.

While bryozoans built much of the reef, their skeletons were rather delicate and often were broken down into a limey silt that gradually accumulated on the sea floor. The limey ooze gradually buried other shells that fell to the bottom. The most abundant fossils in the Platteville Dolomite are those of a group of clam-like creatures called brachiopods. These animals, whose descendants still thrive in modern seas, live attached to the sea floor. They feed by opening their shells and waving a feathery arm through the water to catch any food that drifts by. Other fossils in the Platteville include snails, trilobites (rare) and crinoids, whose stems look like tiny vertebrae. The main predators of the Ordovician seas were nautiloids, tentacled relatives of squids and octopie who lived in long, tapered shells and moved through the water by jet propulsion.

Most of the creatures that inhabited the Ordovician sea produced shells of calcium carbonate, and it is the accumulation of these shells, or microscopic fragments of the shells, that produces limestone. With time, however, limestone can be altered. In the laboratory, limestone which is subjected to seepage and infiltration by seawater over a long period of time gradually alters to another type of rock called dolomite or dolostone. In the reaction, some of the calcium in the limestone is replaced by magnesium to produce the mineral dolomite. Most of the Platteville formation has undergone this transformation to dolomite.

Galena Dolomite
The Galena is a thick formation, almost 200 feet thick in Northern Illinois. Along the Jane Addams Trail, the Galena can be found at trailside exposures from Buena Vista south to Freeport. Exposures north of Buena Vista are of the Platteville, but Galena can sometimes be found a short distance uphill from the trail. While the Galena and Platteville formations are both composed of dolomite, there are some noticeable differences. In the Platteville, the rock tends to break apart in thin slabs often referred to as “flagstone.” In the Galena formation, the layers are thicker and blockier. The Galena also contains a lot of chert (also called flint), which is rare in the Platteville. The chert can be seen as layers or pods of white or light gray material within the tan or brown dolomite. Chert is a very hard mineral which causes excessive wear to rock crushing equipment and modern quarry operators try to site their activities in areas where chert is less abundant. However, it is interesting to think about the changing fortunes of chert, as hundreds of generations of Native Americans prized this rock as an excellent material for making arrowheads, spear points and a myriad of other tools. For the vast majority of time that humans have occupied this part of the world, chert was one of the most sought-after geologic commodities!

The Galena contains a very different fossil assemblage than the Platteville. Bryozoans and brachiopods are rare or absent, while a peculiar fossil called Receptaculites is abundant. This fossil resembles honeycomb, but it is believed to have been produced by a species of colonial blue-green algea. Snail fossils found in the Galena formation support the idea that Receptaculites was an algae, since snails feed on algae. The change in faunas between the Platteville and the Galena is probably due to a change in wtaer depth. As sea level rose, brachiopods and bryozoans gradually died out, while mats of Receptaculites covered the dimly-lit sea floor.

Landscape evolution after the Ordovician
Other marine sediments were probably deposited on top of the Galena, but they have all been eroded away in this area. Younger rocks can be found near the Quad Cities and on toward central Illinois. These rocks tell the story of seas that gradually became more shallow. By the Mississippian and Pennsylvanian periods (360-290 million years ago), Illinois was a coastal swamp. Huge quantities of trees and other plant matter accumulated in the shallow, stagnant waters, but a lack of oxygen prevented their decomposition. These deposits formed the coal layers that form a big part of the economy in many downstate communities.

By the Triassic period (250 million years ago) the upper Midwest was just about all dry land. While dinosaurs undoubtedly roamed over Illinois, they did so on a land surface several hundred feet above the one we currently tread. Any fossils or other relics they may have left were long ago eroded, ground to sand and clay, and washed out to sea along with the eroding bedrock.

As the landscape of the upper Midwest was eroded away, rivers carved deep valleys into the surface. The valleys of Richland Creek and the Pecatonica River were nearly 100 feet deeper just before glaciation than they are at present. But during glacial advances of the Pleistocene Epoch of the last two million years, much sediment accumulated in the valleys. As the ice advanced from the east, it blocked the flow of the Pecatonica. A large lake, called Lake Silveria, occupied portions of the valleys of the Pecatonica, Yellow Creek and Richland Creek. Over the span of several centuries, this sediment filled the valleys to their present level. A brief surge of the ice during the Illinoisian glacial advance saw the glacier spread as far west as Stockton, Illinois. But after the ice melted away the streams, with a few exceptions, resumed their old courses atop their thick valley fills. One notable exception is at Buena Vista, where the Pre-glacial Richland Creek took a broad bend about a mile to the North and West of its present course. The ancestral stream course was apparently blocked by sediment and ice for a period after the glacier melted away from the region, and a narrow gorge was eroded through a spur of rock at the present site of the village. 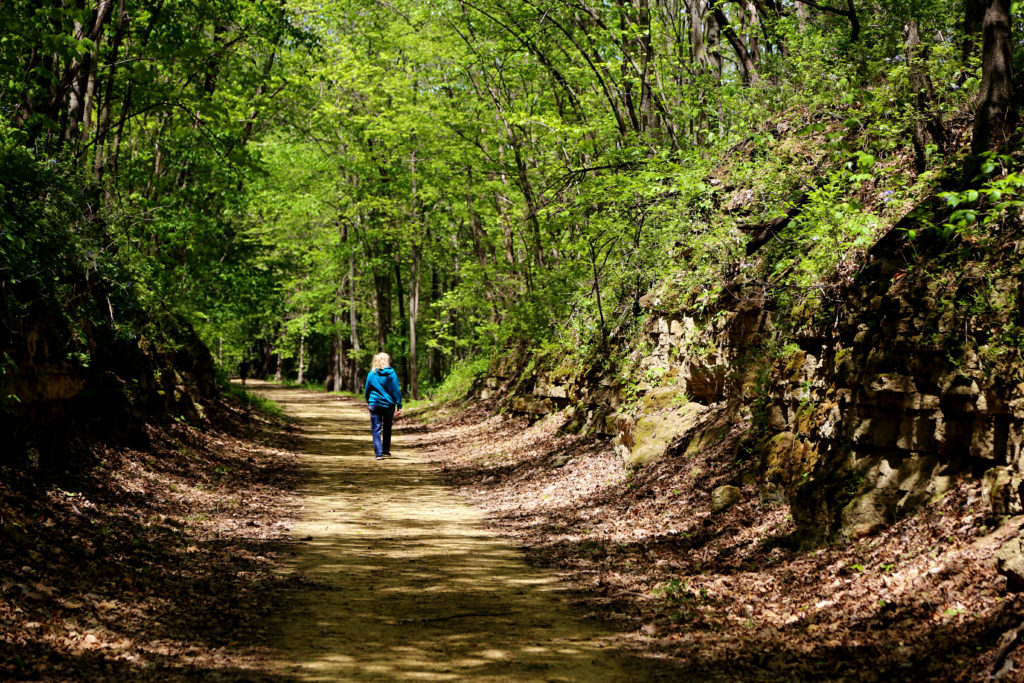