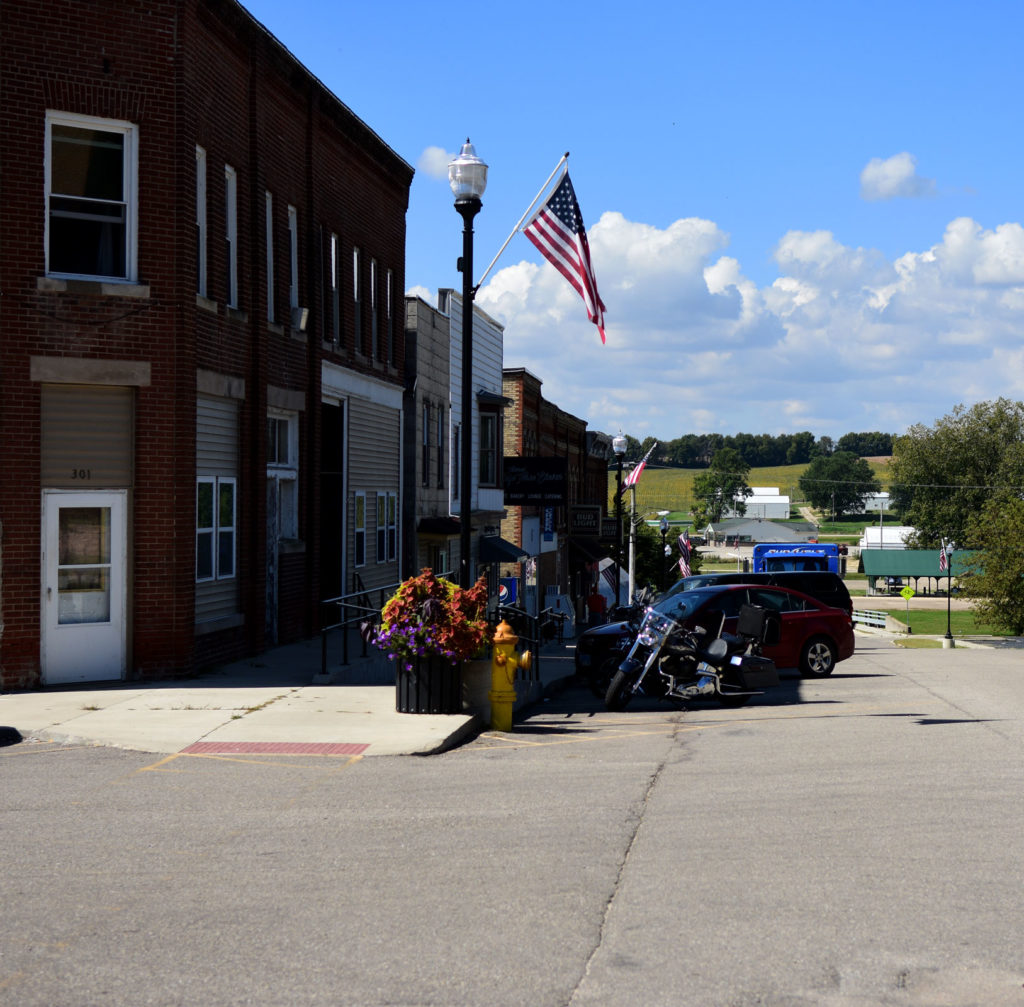 Simon Davis is given credit as being one of the first to settle in Oneco Township about 1833. Andrew Clarno followed him some time later, and on January 1, 1838, John H. Curtis purchased 80 acres from the United States government at the Dixon Land Office, land that was destined to become Orangeville. Curtis built a primitive dam on the west side of the Richland Creek and constructed a gristmill, sawmill and log cabin. In 1843, Curtis died and the mills lay idle until John Bower, who had visited the area in 1845, arrived with his family in 1846 and purchased the 80 acres and mills. Bower also bought 240 adjacent acres, and repaired and began to operate the defunct mill. In 1849, Bower built a mill race and new mills on the east side of Richland Creek at a cost of $8,000, and also constructed the Gothic Revival home located at 207 West High Street. 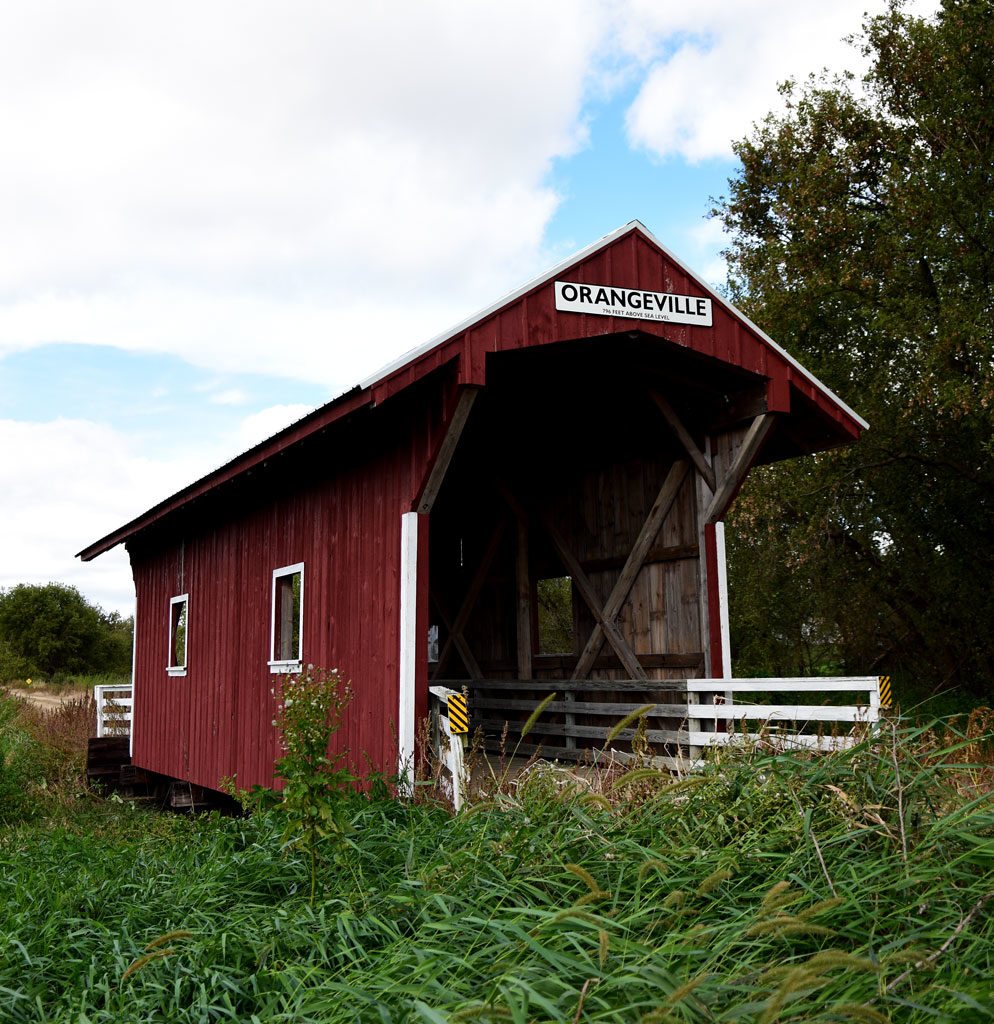 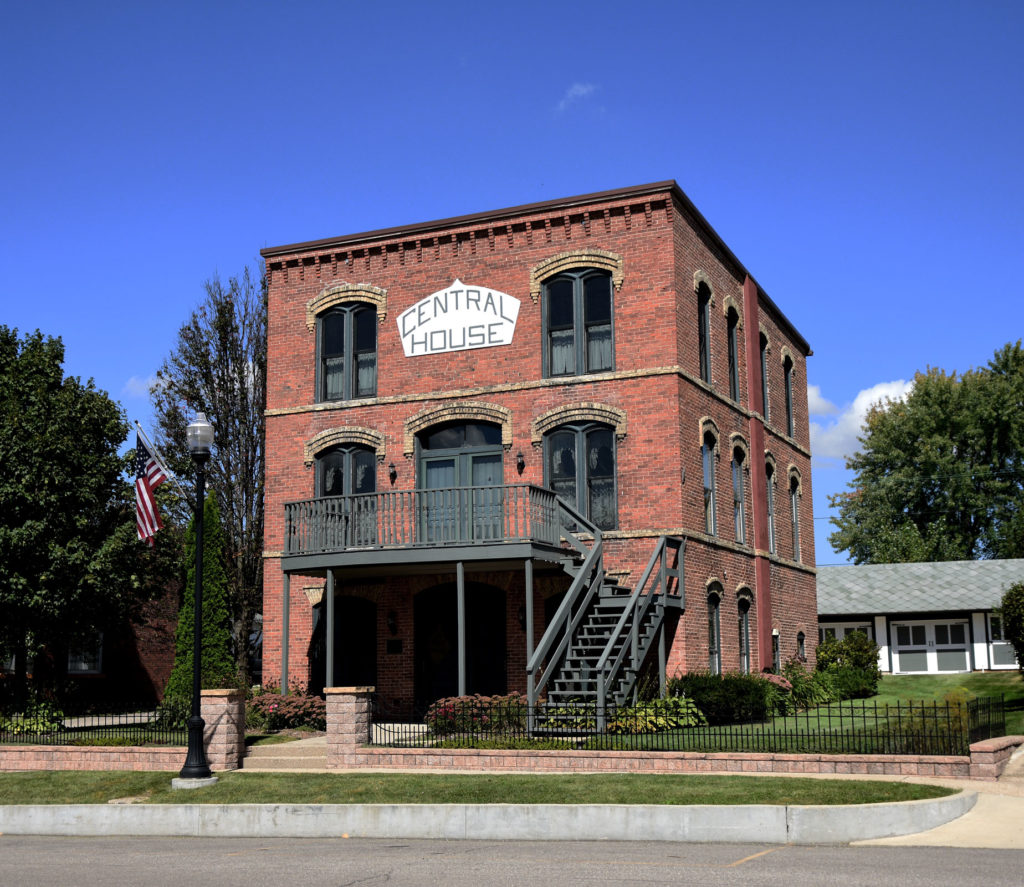 Founding of Orangeville
In 1851, Bower hired Marcus Montelius, the Stephenson County Surveyor, to plat a new town, ORANGEVILLE, and the papers were drawn up and signed on April 14, 1851. The town plat was laid out as a rectangle bordered with High Street to the north, South Street to the south, East Street to the east and Mill Street to the west. The town was bisected with Main Street, creating two blocks of 24 lots each. Bower’s house, known as Union House, was the first residence located within the village limits. C.W. Moore’s house, still standing just east of the current fire station, also was built in 1849, but located on the north side of High Street, and not in the village limits.

Naming of the Village
No one knows why the village is named Orangeville. There are at least three possibilities. The most plausible is that it was named after Orangeville, Pennsylvania, to draw settlers from Union, Centre and Northumberland Counties. We do know that Orangeville, Pennsylvania, was so named to draw settlers from Orange County, NY and Orange, NJ. The German construction of Orangeville, PA, homes is quite similar to the older homes in Orangeville, IL. The second possibility is that it was named after Hedge or Mock Orange that grew wild and was used to mark fence rows in the area. A third possibility is that the village was named after a prairie plant prolific in the area that had an orange flower. The 1880 History of Stephenson County claims that the village first was named Bowersville. Earlier documents state that before the founding of the village, the settlement was known as Bower’s mill or Bower’s mills. No histories prior to 1880 make mention of Bowersville, and we believe that the later introduction of “Bowersville” may have been a mis-remembrance of “Bower’s mill(s).” 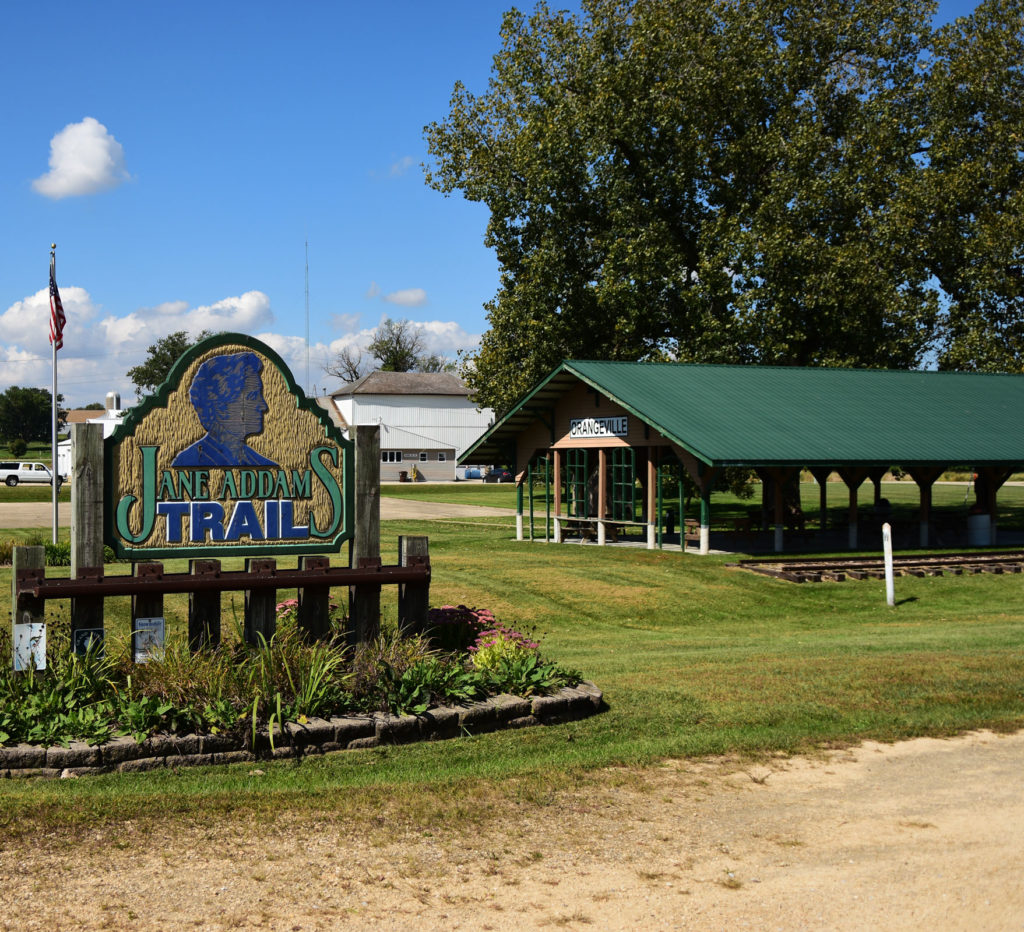 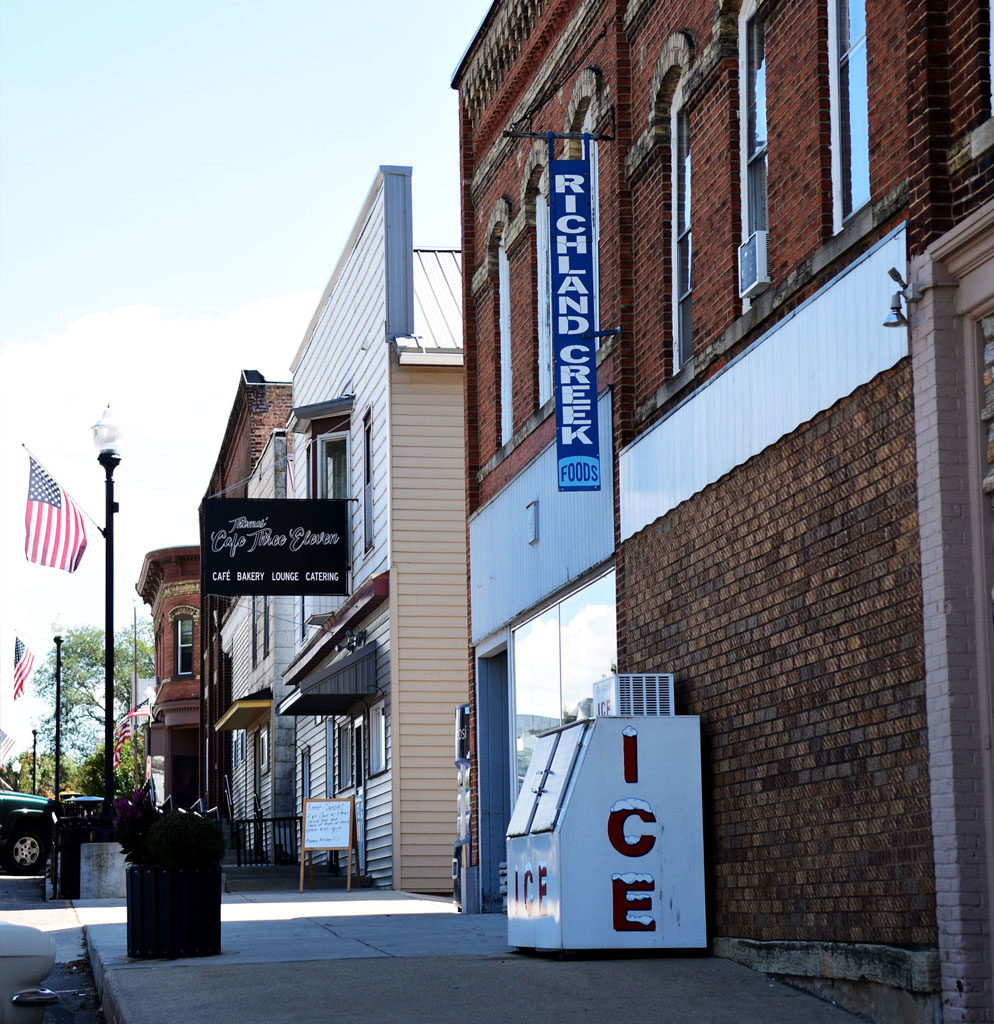 Early Growth of the Village, 1851-1881
Orangeville was in direct competition with Oneco as a growing center of commerce, and by 1854, the government determined that the population between the two villages was enough to establish a post office. According to a letter written by a resident of the time, the determination was made by announcing that, on a certain day, people would line up on one side of the road or the other, depending on which village they supported. Orangeville won by the thinnest of margins.

The village continued to grow through prosperous times. From the 1880 History of Stephenson County by M.H. Tilden:

Orangeville – An island village, delightfully located in the southeastern part of Oneco Township, handsomely built, inhabited by an industrious, progressive, and enterprising class of citizens, containing a population of from four to five hundred and the market town of the section, wherein it is situated, the village does an immense business, and presents a fine field for investment or residence.

In 1861, the breaking-out of the war caused a large increase in the volume of business done by the merchants, which was materially diminished for some years thereafter, owing to the unsettled condition of affairs throughout the county, the departure of volunteers, and other causes producing similar effects elsewhere. The last half of the decade beginning with 1860, however, witnessed an improved state of public feeling, producing a better market for commodities and correspondingly prosperous times. Orangeville of course participated in these benefits, and so pronounced was the success which attended her development and building-up, that in 1867 the village was incorporated as a town, with such prerogatives and privileges appertaining thereto as by law are conferred, including town officers. 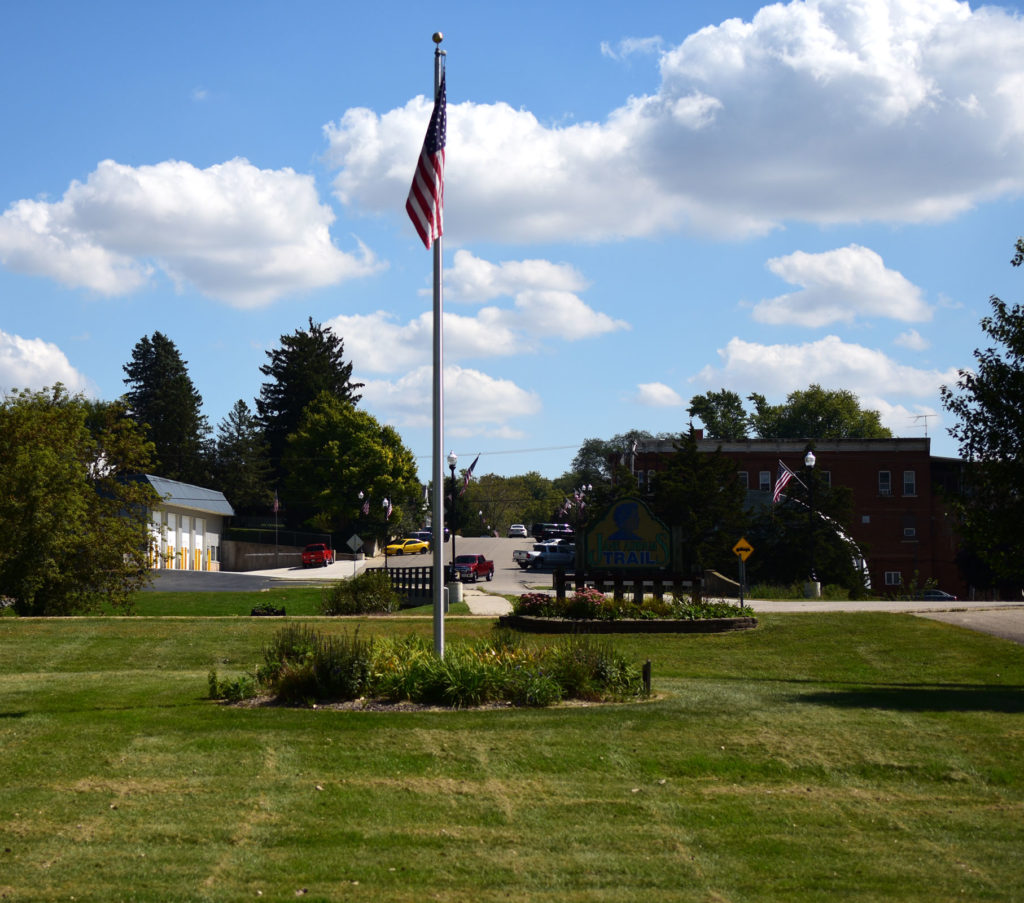 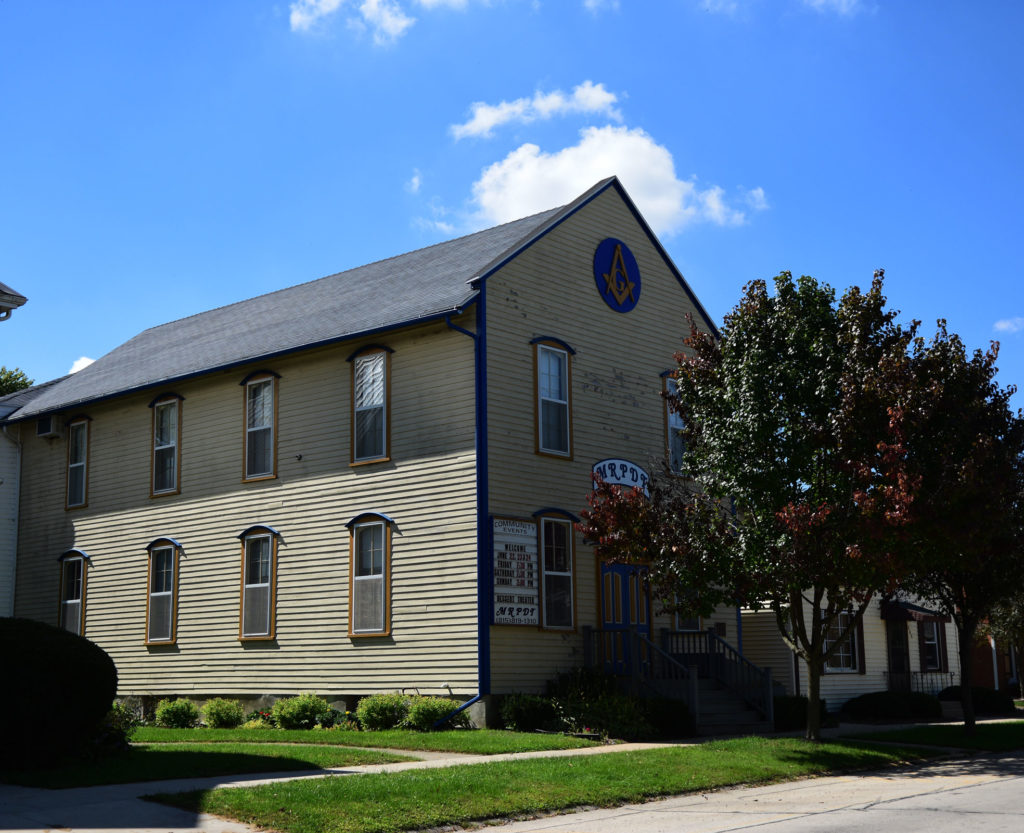 The Boom Years, 1882-1928
By 1882, Orangeville was well on its way to becoming the second city of Stephenson County. The downtown was essentially complete by the 1870s with all commercial lots having been sold and built on in what is today the historic downtown district. By 1877, it had attained a population of over 300. In 1883, the first village newspaper, The Orangeville Alert, began publication. But the real commercial building boom began in 1887, with the coming of the Illinois Central Rail Road. When the ICRR decided to link Freeport, IL and Madison, WI, in 1887, the only incorporated village directly on the line between Freeport and Monroe, WI, was Orangeville, IL.

This set off a town boom in the building industry. Fourteen new brick buildings were built as a direct outcome of this venture. They included most of the brick buildings in the downtown area, minus the Wagner Building (southwest corner of High and Main Streets), the Moore Building (southeast corner of High and Mill Streets), and Central House. The original hotel in Orangeville, located on the site where Central House now stands, burned down in 1888 and Central House was built in 1890 by George Hoyman, son-in-law of John Bower. The Moore Building was constructed by E.T. Moore in 1899, and the Wagner Building was constructed by H.W. Wagner in 1906.

The town expanded physically to support residential growth, too. Several additions were incorporated into the village during these years. 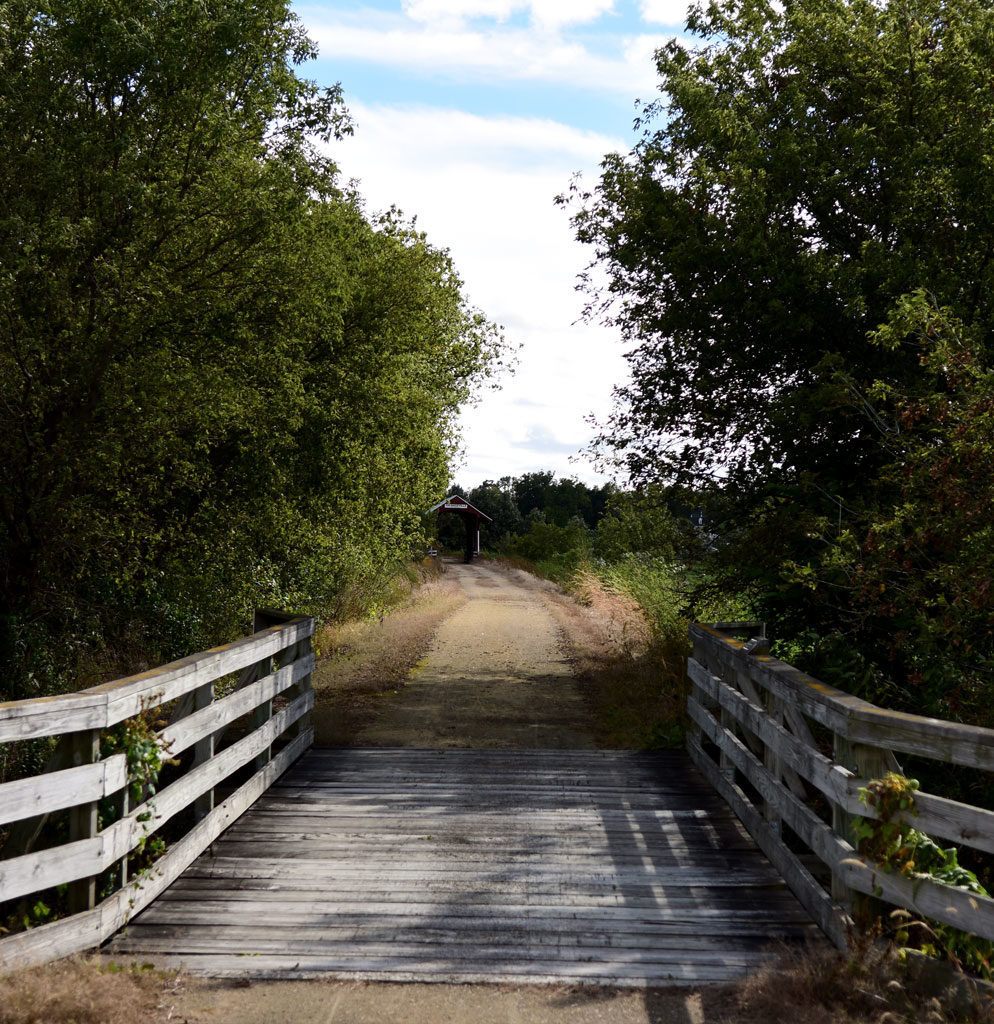